We call it “seaweed” but it ain’t. Sargassum is actually an algae, among closely related species occurring in the Sargasso Sea, in the North Atlantic, off Bermuda. It is sometimes referred to as brown algae, which is a rather undignified name if you ask me. Sargassum is a floating ecosystem unto itself, without anchor to the seafloor, with fish and other aquatic species that are native to it alone and thrive as part of it. It is not, however, a part of the natural ecosystem of the beaches of South Florida. Mass onshoring of Sargassum has only been happening in Miami Beach since 2014.

Although an article about algae seems tailor made to bore the living daylights out of you, it is actually a rather horrifying subject. Sargassum has the Yucatan and the Caribbean on the brink of environmental and economic devastation, and if we are slow to react here in Miami Beach – which I fear we are – we could very well deal a death blow to our tourist economy. My primary aim here is to scare the pants off you and also to bring you some knowledge on a subject that is almost impossible to research with traditional means, a situation that has led to a lot of scoffing by otherwise well informed folks.

Sargassum seems at first look like a natural phenomenon of little consequence. But, as the members of Monty Python might say, this seaweed’s dynamite! When wide expanses of Sargassum make landfall, it decomposes and depletes oxygen from the near-shore areas. Sometimes it results in zero-oxygen conditions which cause massive fish kills and death to coral reefs. Its thick mats blot out the sun, which further harm reefs and kill off plankton, the foundation of the entire ocean ecosystem.

Accumulated onshore, it interferes with hatchling turtles attempts to reach the water. When it decomposes, it releases hydrogen sulphide gas, which is harmful to humans. In the Yucatan and some hardest-hit Caribbean islands, the Sargassum can cover the entire beach strand two-feet thick. The stench is so horrible people can’t stand to go anywhere near the beach. In those places, the shore ecosystems are on the verge of collapse, as are the local tourist economies. 2018 was by far the worst year for the Sargassum onshoring. If it occurs again at that level this year, those coastal ecosystems and the tourist economies dependent upon them may never recover. Eventually both of those things could happen on South Beach. Apparently Key West has it bad right now. 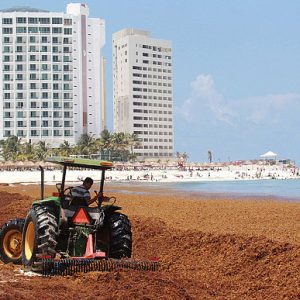 Except in rare circumstances, what we think of as “natural” beaches aren’t natural at all. Natural beaches are covered with accumulated debris from storms and the trash, trash which especially includes plastic these days, that washes up daily. Beaches look pristine because we haul the debris away and we groom them.

It’s important to remember that there is nothing natural about the beach strand in Miami Beach. It is manmade. By 1970, the beach had eroded so severely that waves were lapping up against the Fountainebleu, and the high tide mark almost reached Lummus Park. The disappearance of the beach strand was a major factor in the demise of Miami Beach as a tourist destination.

Desperate for a solution, the county petitioned the Army Corps of Engineers for a permit for beach renourishment. Beginning in 1975, we brought in a 200-yd-wide expanse of sand and recreated what looks like a “natural” beach. Our beach looks natural in the same way that things at Disney World look natural. It’s amazing what man can do with capital and tenacity.

On Miami Beach, to maintain the façade of “nature,” some renourishment work is done nearly every year. Sargassum is not a natural part of the ecosystem here, but the Boucher Brothers and the tourists are.

The new southern version lies within the unstable South Atlantic Gyre. The southern gyre has less rotational energy than its northern counterpart, due to the odd paths of its boundary currents (guided by the jutting coastlines of West Africa an Brazil), and fluctuations in those less-stable currents allow the Sargassum to break away, drift north, and inundate the Caribbean, the Gulf, and the southern US Atlantic coast during much of the year. In 2018 it made landfall as far as North Carolina.

Because the Southern Sargasso Sea is so new, scientific consensus as to the how and the why of it have yet to solidify. But the working hypothesis is that the formation of the Southern Sargasso Sea is a result of global warming, combined with the nutrient plume from Amazon River Basin and Congo River Basin agriculture. Theories as to global climate change attribution are pointing to rising ocean temperature, increased carbon dioxide (CO2) availability, and increase in ocean acidity caused by the increased atmospheric CO2 concentration, which is now at its highest point in at least 800,000 years.

Ocean acidification is a new specter introduced from the rise in atmospheric CO2 level. The CO2 exerts a vapor pressure that forces the gas to dissolve in sea water where, through a chemical reaction, it creates carbonic acid, which increases overall ocean acidity (it lowers pH). In the past 200 years alone, ocean water has become 30 percent more acidic—faster than any known change in ocean chemistry in the last 50 million years.

The phenomenon is worth discussion in its own right, because the change has led to the dissolving of the shells of marine organisms. The worry of course is that the change could lead to total collapse of marine ecosystems, which would necessarily mean starvation for much of the world’s population whose diet is dependent upon fishing and aqua-culture.

Ocean acidifacation’s role in propagation of Sargassum has been supported in several recent studies of Sargassum at studied control sites and at volcanic CO2 vents off the coast of Italy. The conclusions are that Sargassum, particularly under high-nutrient conditions (e.g., the nutrient plumes off the Amazon and Congo Rivers), thrive under higher CO2 conditions.

One interesting finding is that the presence of Sargassum and other seaweeds may actually mitigate acidity, especially local to it. This is all new science. Research on ocean acidification did not begin at all until 2004. There is still much more to learn.

Clearly, however, the scientific consensus is there is no sign of a change in the trajectory of Sargassum growth and mass onshoring. By all measure, it is likely that, as time passes, the Southern Sargasso Sea will grow and the inundations will worsen. Given that 2018 was the worst year ever, it is at this point an environmental emergency.

Oh, and, contrary to what you will often read, Sargassum is NOT harmless to humans. Exposure to the fog of sulfur dioxide gas is harmful to people with respiratory sensitivity. More perversely, the Sargassum ecosystem includes a number of species of jellyfish and its relatives. In particular, the larvae of the thimble jellyfish, Linuche unguiculata, are tiny and virtually invisible, but they sting. If they get in your bathing suit their stings look like a rash and are clinically referred to as seabathers eruption. Children are most severely affected. Often, the rash is attributed to “sea lice” which, although a menace to fish, particularly to farmed salmon, sea lice are not the culprit.

More perverse still is the hydroid, a life stage for most animals of the class Hydrozoa which is a relative to jelly fish. The hydroid is a weird, tube-shaped organism, which grow as long as about an inch and a half, that attaches to the Sargassum, is the same color and looks like it’s part of it, until it stings the living shit out of you! 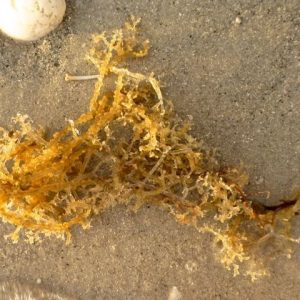 Sargassum with hydroid, like the one that stung the fire out of the author (photo: Pam Rambo, Sanibel Island, Florida, iloveshelling.com) 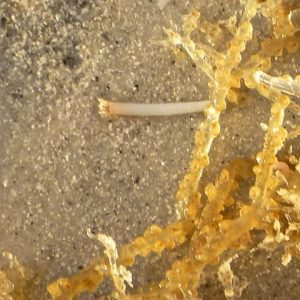 No one wants to go to a beach inundated with Sargassum. It’s ugly, it stinks, and you can’t swim.

Sargassum remediation techniques are being developed on Caribbean islands where the economic stakes are high: beaches in Barbados were closed for six months in 2018! They are using sugar cane loaders – they do not take sand with the seaweed. They are also scooping it with nets and catamarans rigged with conveyor belts onto barges, before the Sargassum can reach land.

The response here, where Miami/Dade County is responsible for maintaining the beach strand, is frighteningly amateurish. No, pushing back into the water Sargassum that has made landfall and died is absolutely NOT what you do. 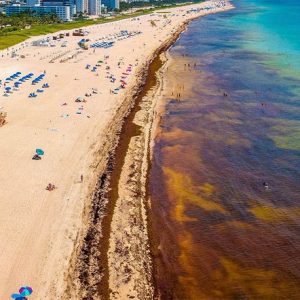 It is true that Sargassum can help stabilize beach sand and promote dune growth. But at what cost? The County’s use of bulldozers to move Sargassum and the sand into piles is horribly disruptive to beach stability however. I shake my head every time I see footage of that work in action.
Miami/Dade County claims it would cost $45M per year to do daily cleanup of Sargassum. I really don’t know what assumptions they have used for that number and what methods they would plan to use. I also don’t know how the cost/benefit analysis works out. Regardless, I think it’s positive that they are willing to address the problem, even if the commitment seems a bit weak.

Beach towns that invest in effective cleanup of the Sargassum will reap financial rewards. Tourists will flock there as they flee other places. If we wanna see our tourist economy die, we should just sit back and do nothing.

It is frustrating that many of the sources of information are essentially disinformation. The phenomenon is still so new that even relatively trustworthy sites (I’m talking about YOU Wikipedia!) are useless. I think it is one of the reasons opinions vary so greatly in discussion groups.

I hope this is helpful. In the interest of time, I have not included citations to sources. But I tried to be as faithful as possible to the sources I looked at. If you think I misstated something, please drop me a comment and let me know. It’s better to be factually correct than to be right. Although I love being right. 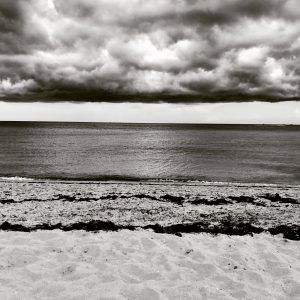 The world of organizational performance is being revolutionized by new concepts. High Reliability Organizing and the New...

Look at the warning labels on a ladder. Death and paralysis lurking on every step. Warnings so...

There are 0 comment. on "Our Friend, Sargassum (okay not really)" 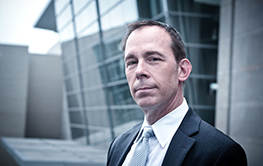 We call it “seaweed” but it ain’t. Sargassum is actually an algae, among closely related species occurring in the...

The world of organizational performance is being revolutionized by new concepts. High Reliability Organizing and the New View of...

On Thursday, October 24, 2013, an accident occurred on a ride called the Vortex at the NC State Fair,...

Look at the warning labels on a ladder. Death and paralysis lurking on every step. Warnings so severe that...